The Mini JCW RRC’s third season was expected to be eventful. That was the third joint season of Valery Gorban and Vladimir Korsya. Having such a powerful vehicle, the team decided to trip abroad for the first time. And, as expected, the season started from Rally Sweden.

In Sweden, the team was seemed to resume its natural course of rallying. There were two Minis in boxes again, and Alexey Kikireshka’s crew was again under Eurolamp World Rally Team’s banners. Later on, it became known that Alexey was going to have only a single trip, despite the fact that initially he had applied for seven stages of WRC-2.

The crew of Valery Gorban and Vladimir Korsya did their homework quite well to get prepared for the race in the Swedish forests. Thus, Ukrainians showed themselves right on the first day of the race. Their times were steadily appeared in the top five of the WRC-2 standings and even once recorded as the best time in their class. Their fair and uncompromising fight for every second with such strong rivals as Jari Ketomaa, Pontus Tidemand and Eyvind Brynildsen resulted in an intermediate second place in the WRC-2 standings.

The second day of Rally Sweden was not as successful as the first. Three minutes were lost through a flip off to a snowdrift, and the second position turned into the fifth one. Yazid Al-Raji was defeated at the end of the day, and one position was won back. The crew demonstrated a comprehensive stability during the last day. Frederic Olin hit the marbles and allowed the Ukrainians to move to the third position in the standings. For the first time in fifteen WRC-2 races and for the second year of rallying under Eurolamp World Rally Team’s colors, they finally podiumed.

“To achieve our today’s result, we worked hard, trained intensively, improved car’s adjustments, and it is quite obvious that we finally found the right ones allowing us to drive that fast,” Valery Gorban summed up after the third-place finish.

Alexey’s Kikireshka’s crew finished eighth in the standings. It was the jubilee (sixtieth) start of the Kiev citizen, after which he took a long pause in competitions. 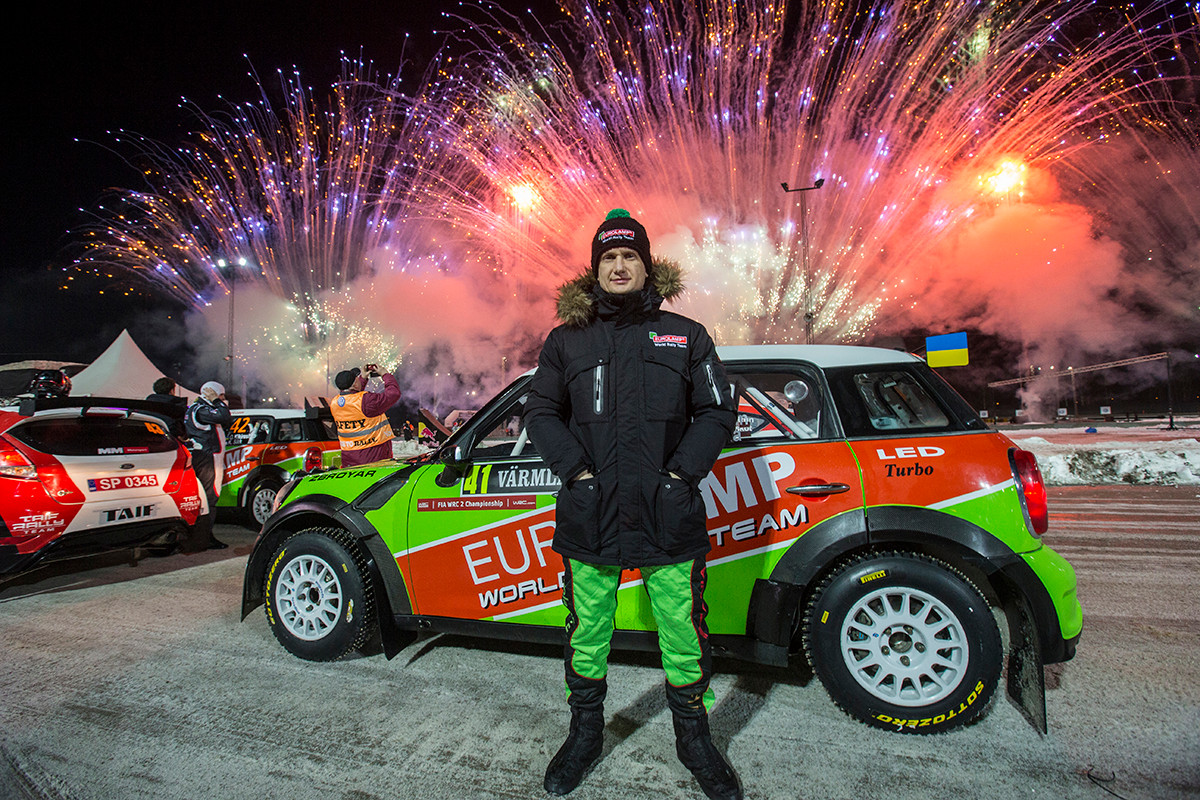 For the first time, the team visited North America. Rally Mexico became to Ukrainians a sort of something strange and unknown. Thus, a gap in overseas travels was filled in, and one more continent got acquainted with the Ukrainian rally team. The first Mexican pancake was, as the saying goes, lumpy. The crew failed to unlock all its potential during the first day because of the steering issues. The second day also appeared to be unsuccessful: a lot of people saw the Mini JCW RRC driving with the hood open. A failure of the front-wheel drive became another hard knock, which was only a harbinger of a fall out of the race. An awkward landing from the hill and damage to the car reinforcement structure did not allow the crew to continue the “super rally”. Moreover, the car had to be sent back to Ukraine, instead of Argentina, as planned previously. As a result, the competition calendar was changed. 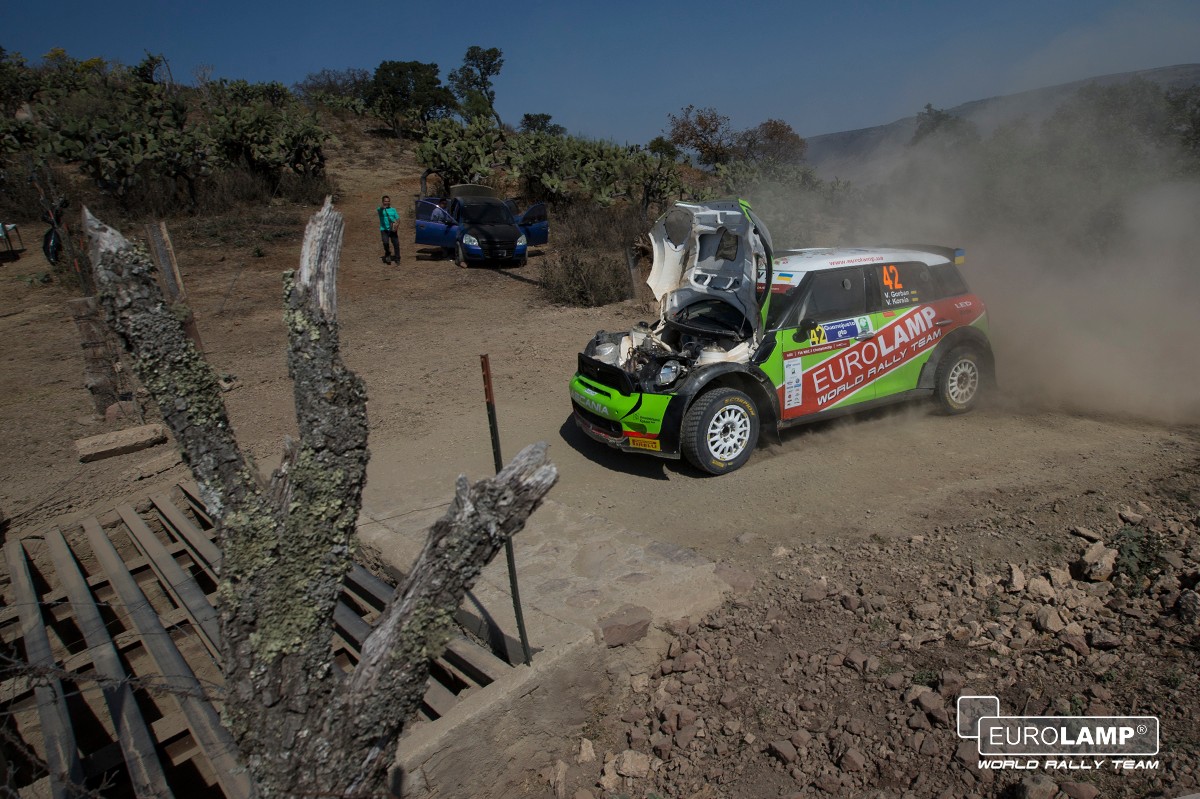 Rally Portugal was the team’s third trip of the season. The number of participants in the WRC-2 standings increased drastically, and twenty-eight crews appeared at the start. The race “moved” from the south to the north of the country, and actually returned to the place where it started.

The team’s car got more red color. Now the front bumper was separated by a red wide stripe.

It was neither good nor bad race. During the whole first day the crew was trying to break through. They managed to get some points and to pull out the eighth place in the WRC-2 standings almost at the finish.

The southern journey continued on the island of Sardinia. This race has never been easy for the team. Indeed, it appeared to a kind of previous one, except for the falling out of the race on the first day and restarting on the second. The tenth place at the finish could not be deemed success, but the team finished the race in spite of everything. 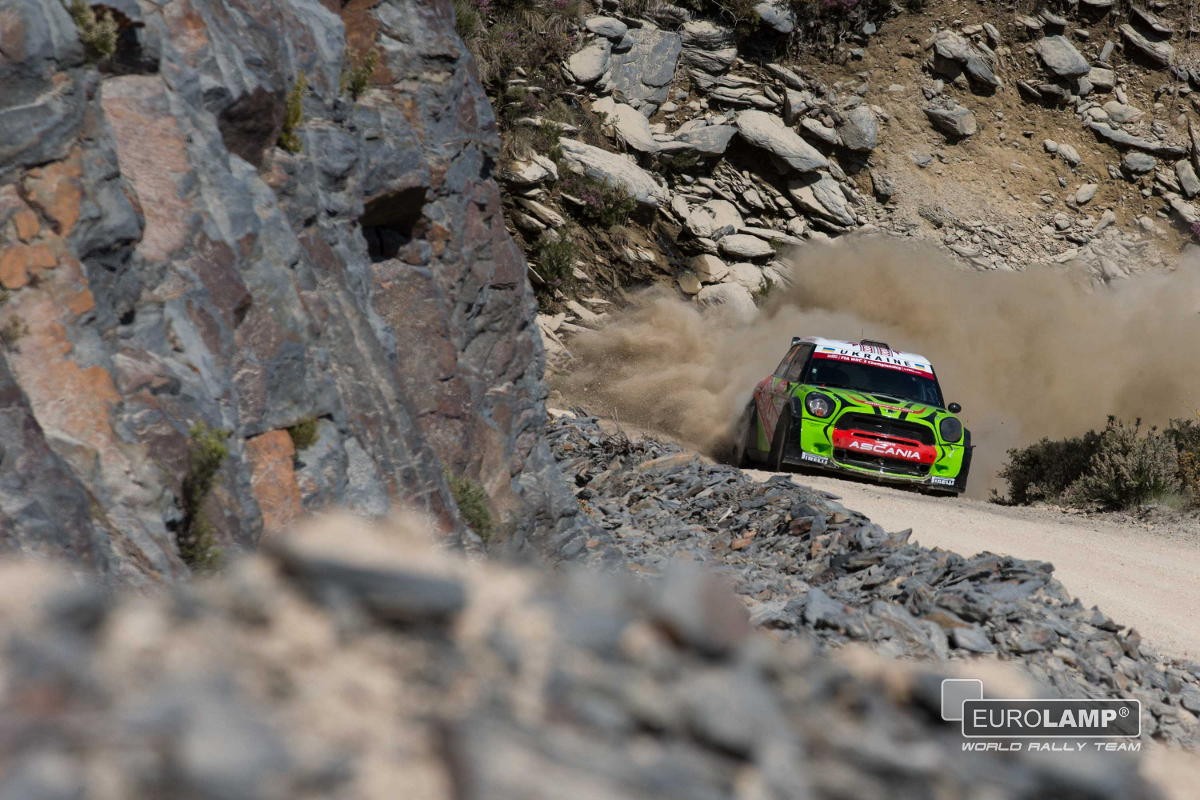 Rally Poland was expected to be a sight for team’s sore eyes. It happened last season, and it ought to happen now. But it just didn’t work that way: falling out of the Polish race can be probably considered as the most bizarre one both in the crew’s career and in the world rally in the season. A long series of various events ended with the crew leaving the race due to a seizure by the Polish police. Such a nonsense situation happened because of the inconsistency in actions both of organizers and law enforcement officers.

The Polish race was followed by the Finnish one, which continued a run of the crew’s bad luck. The crew had to stop the race on the second day due to the car damage. Scoring points added by the Finnish crew of Yusiya Väinionpää on his Citroen DS3R5 to the team’s collection were the only consolation after the Finnish voyage. The Finn had a desire to drive the home race in the WRC-2 standings, and the Ukrainian team had a non-filled vacancy for the season, for which Alexey Kikireshko submitted a request at the beginning of the year and refused to participate thereafter. As a result, 15 points were not come amiss for the team. 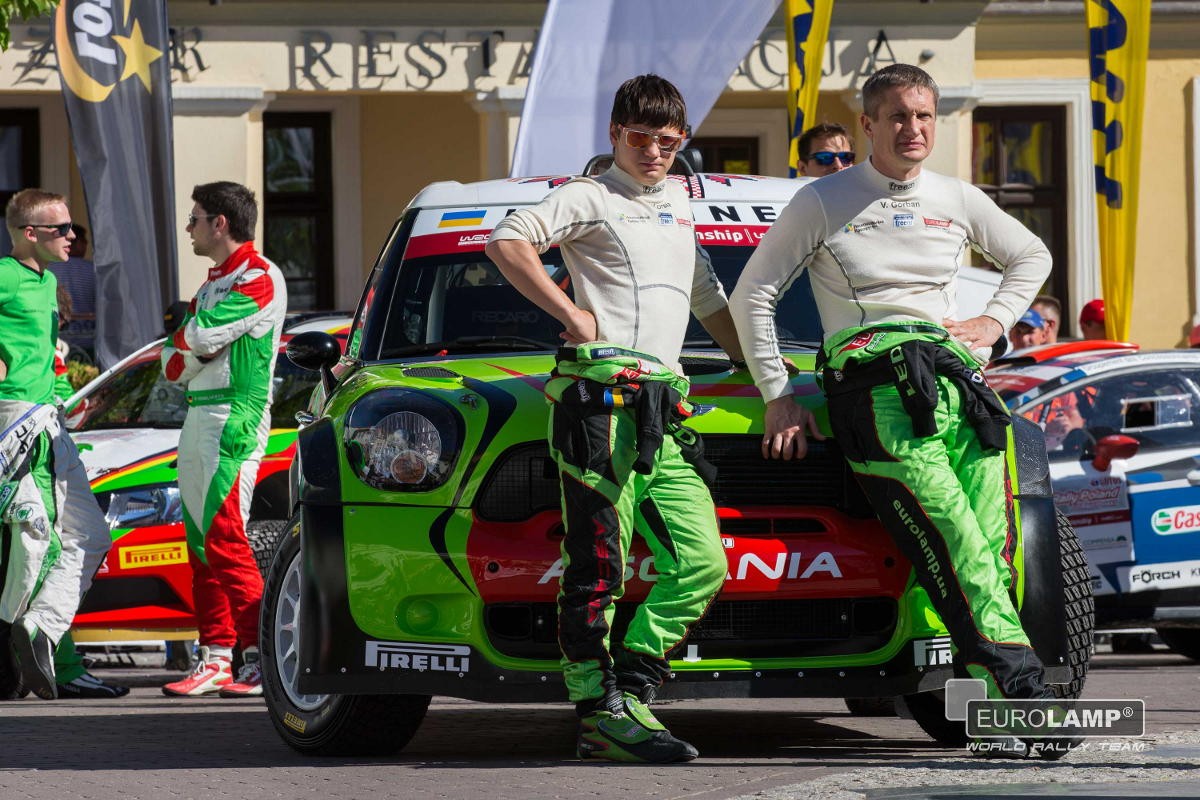 After the two-month break, the team had another start. Rally Catalunya was the second to last in the green-and-red’s season. The first day on the ground seemed to be encouraging, but the fight for top three of the standings did not last long. Fall out the track and restart on the next day resulted in only the sixth place in the WRC-2 standings.

The team’s season was traditionally finished with Rally Wales. They managed to stay in top five from the start, but a fall out on the second day cast a long shadow on so promising expectations. A penalty of forty-two minutes left no hopes for anything worthwhile. However, restart on the final day brought a statistical finish, though it was the fifteenth place in the WRC-2 classification. Legendary PH Sport team also added one point to the team’s collection.

The team took part in seven stages of 2015 season. There was not much to boast of in the final table: only eighteenth place in the WRC-2 individual standings and eighth in the team standings. Nevertheless, on the bright side there were the first podium in the standings, increased speed and five special sections won in WRC-2, compared to only two last year.

At the end of the year, FIA amended their technical requirements for the WRC-2 vehicles once again. It became clear that the time of Mini JCW RRC on the world stage had already passed, and it was the right time for Mini JCW WRC to appear. 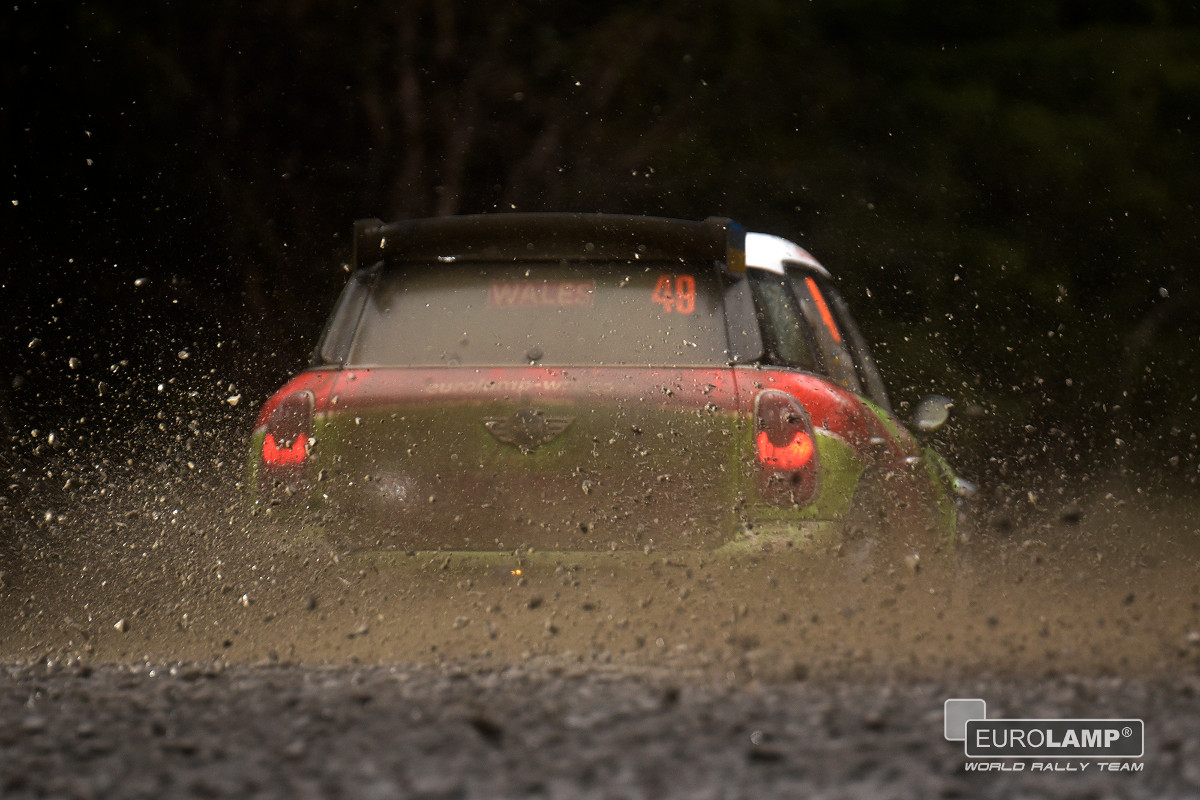