Eurolamp World Rally Team started its next (fourth) season with surprises. In December 2015, FIA World ​​Rally Council initiated adoption of new regulations. They toughened requirements for the vehicles, which were supposed to participate in the WRC-2 standings. Regulations were aimed at not admitting Super 2000 and RRC class cars to rallies, whereas the priority was given to more promising R5 class. Although the officials were not that dare to completely ban the old-class vehicles, they succeeded in making them deliberately slower compared to their competitors of R5 category. Dimensions of restrictor washer were reduced specifically for the vehicles of RRC category, which automatically reduced their power.

“We took, to some extent, a forced step. As far as the vehicles we drive can participate both in WRC-2 and WRC-2, and taking into account that the vehicle specification under the RRC requirements became weaker, we decided to try our luck in the top division”, summarized Valery Gorban before starting the first race.

It was planned to participate in nine stages of the World Rally Championship during the year. The team set up an ambitious goal: to get into the top ten of overall standings.

The season was traditionally opened with Rally Sweden. Unusually warm winter took its toll: most of the special sections were canceled, and there was a threat that the race would be cancelled at all. Just like in the good old days, the team’s garage numbered two cars, but already of WRC class. One was for Valery Gorban and Vladimir Korsya, the second was rented by the crew of Mait Maarend and Mihkel Kapp.

A tense anxiety before the start grew like a snowball. Race headquarters informed hourly about the number of the distances shortened. Even the first special section at the Karlstad stadium was canceled. Nevertheless, the opening was held right there, and the race started. The crew could not immediately take control of such a fast car. A lot of time was lost because of running off in one of the turns and returning the car to the track, which affected final results.

After the last year’s “bronze” in Sweden, it became clear this year that the team has to learn driving all over again. The next trip was planned outside Europe.

Another visit to the American continent gave rise to optimism. After all, the team drew a lesson from the previous one. So, Rally Mexico met Ukrainians for the second time.

The crew’s start was not successful, but they managed to get to the tenth line of overall standings by the middle of the third day. A course was taken on the stability, rather than the speed. As far as the rivals were behind at a sufficiently distance, the tenth position was preserved. The car was directed to a technical examination after the finish, which meant that the team got into the final classification. The tenth place brought one point to the crew members and they were automatically added to the FIA ​​priority list. That status acknowledged the crew’s competency allowing them to start along with crews that participate on the same class vehicles, as before Eurolamp World Rally Team had to start after the crews on the WRC vehicles start in WRC-2 and WRC-3 classification.

Successfully finished Rally Mexico opened the way to Argentina. The crew returned to South America after the four-year break. Unfortunately, they managed to drive only till the sixth special section because of a fatal damage caused by stone impact, and, as such, Rally Argentina became one of the shortest races in Valery Gorban’s career.

The Portuguese race – the fourth trip of the team within the frames of the World Cup – did not become successful either. Run-off the track due to the suspension damage on the last race day deprived the crew, the team and the fans of any reason to be happy.

Trips to the island of Sardinia and to Poland were also unlucky. Restarts under the rally2 system allowed the team just to be among the top thirty of absolute standings.

The team believed that the visit to Finland would put the end of its bad luck, but the transmission issue occurred during the first race day left no chances to succeed. There were no restarts, but the finish was beyond the top twenty. 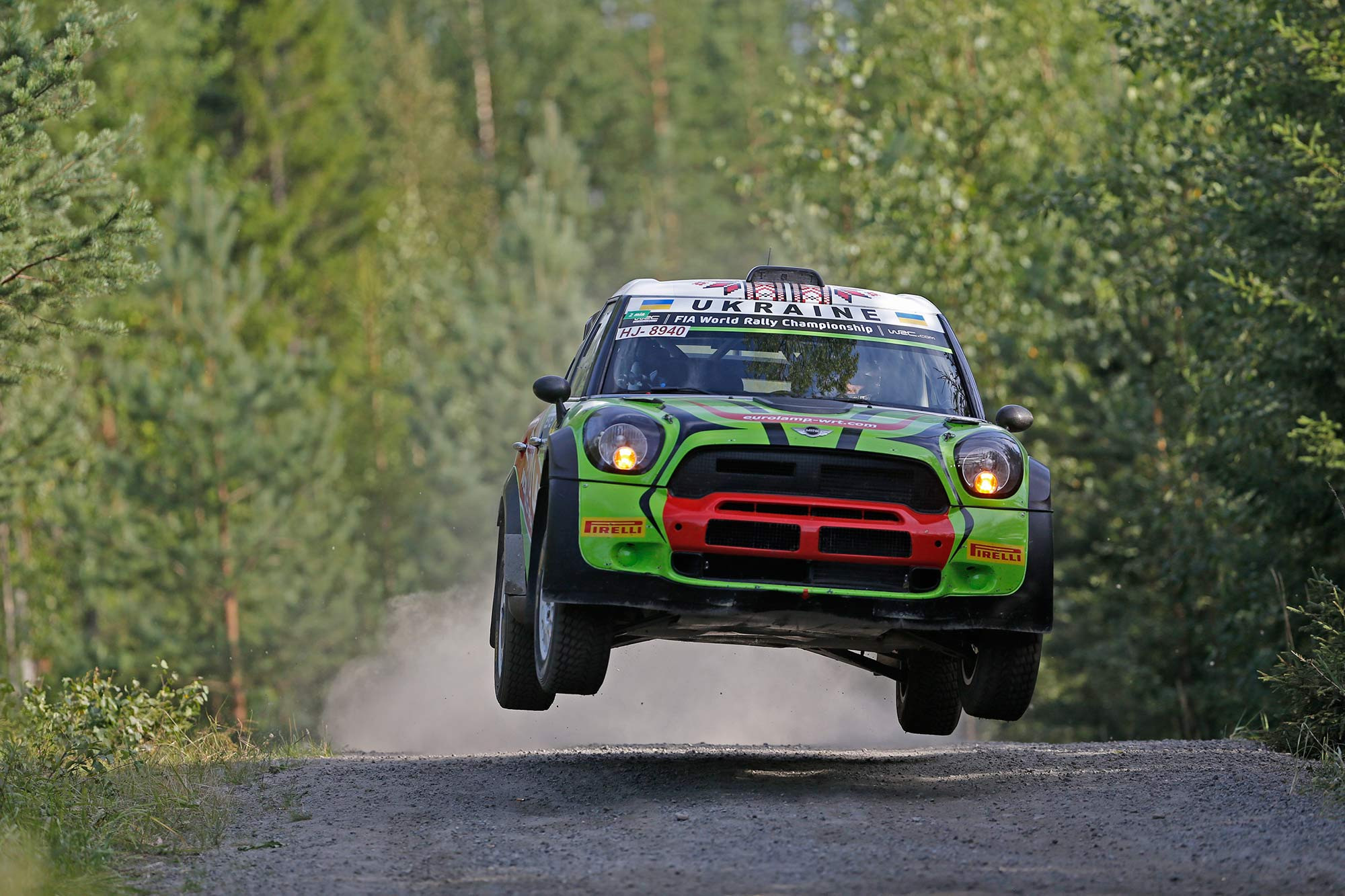 A break in the program of participation in the World Rally Championship made it possible for the team to show themselves on their native land. Stara Fortetsya rally resumed in Kamenetz-Podolsky became the first “home” start for the last three years. Nobody was able to leave behind the Ukrainian Rally Champions who participated even not on the Mini John Cooper Works WRC, but on the old good EVO IX.

In October, the team returned to the World Cup tracks.

The autumn race in Spain was smooth and uneventful as never before. The first day on the wet soil was not that bad. And at the end of the day, the green-red Mini John Cooper Works WRC was listed nineteenth in the final table. Two next racing days held on asphalt road allowed the crew to move in the list for four positions up. As a result, the crew finished at the 15th place of overall standings. 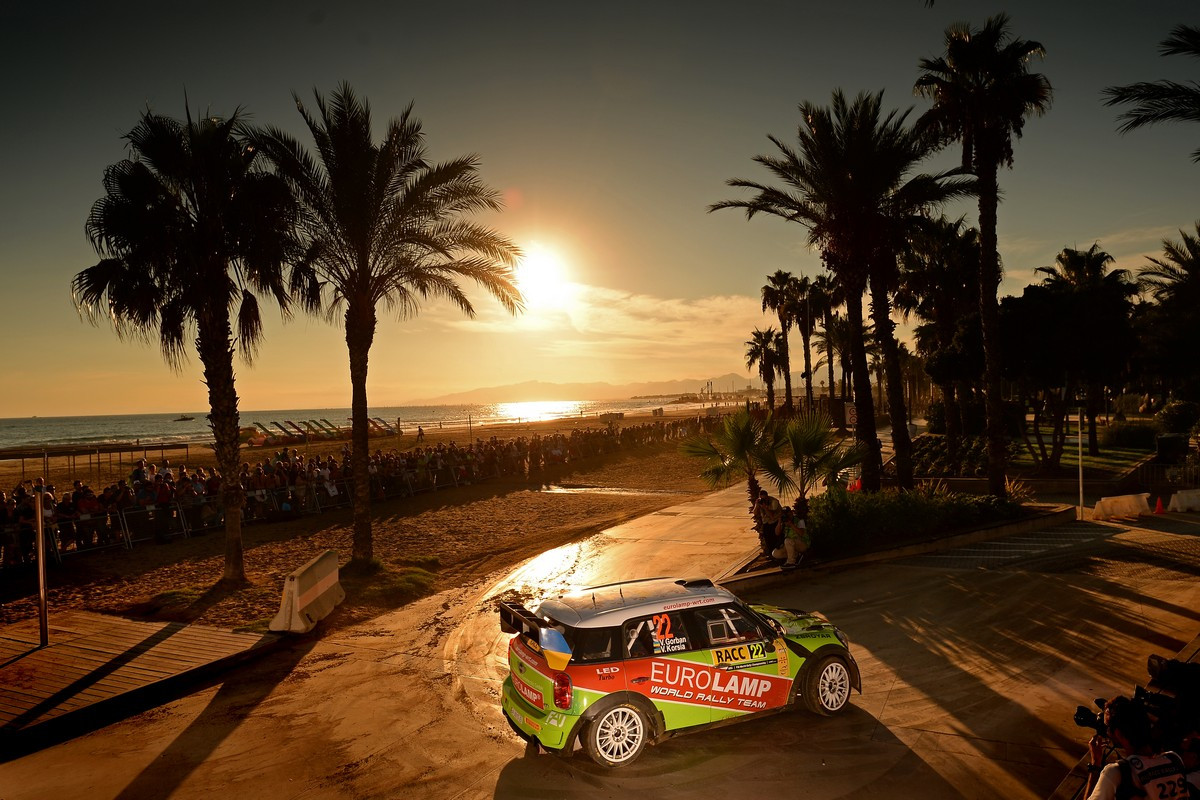 The final trip of Eurolamp World Rally Team within the frames of the world rally was traditionally scheduled to Wales. The race was difficult, and it summed up the whole season, which was not very successful sometimes. Good starts, problems, runs off, restarts and much-needed finishes happed during the season stages, and repeated at Rally Wales.

Nevertheless, the Ukrainian crew decided to finish the season at home. They arrived to Kherson Rally at Mini John Cooper Works WRC painted in different colors. Fantastic and fancy livery suited the car to the greatest extent, and it did not take long to see the result. The win with a huge margin sweetened not so fortunate season on the world-class vehicles.