In view to the expiration of the international homologation certificate, Mini JCW WRC vehicles could no longer participate in international competitions, and the team decided to focus on national championships of Estonia and Latvia. Stages of two championships overlapped, which made it possible for the team to play a double game.

Rally Aluksne became the first stage for the Ukrainian-Estonian crew. It took place in the eastern part of Latvia, where Valery Gorban and Sergei Larenz were laying down their rule to the full extent. The car’s sharp turn at the last special section of the race messed up a bit, but the control over the first position was retained and the first gold of the season was won. 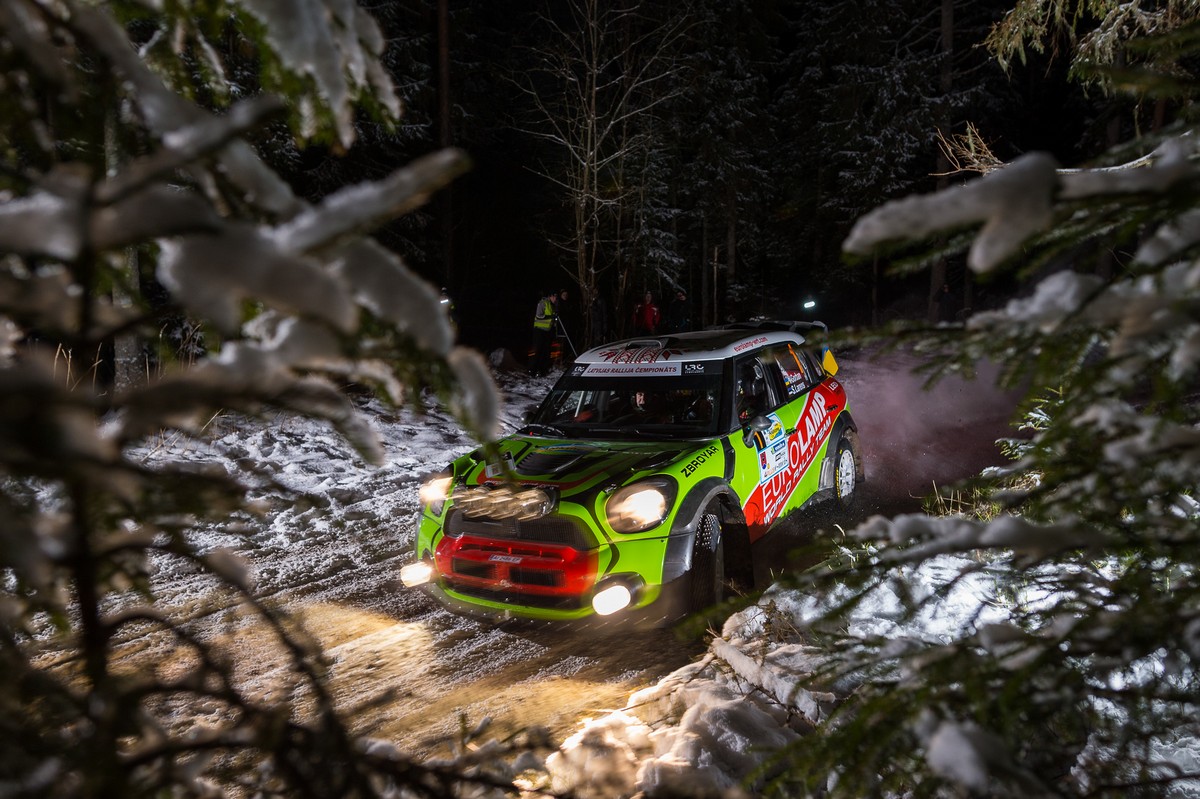 Nikolay Gryazin won the race indisputably, whereas the crews of Egon Kaur and Valery Gorban had to compete for the rest of prize places. Although they were fighting until the very finish, Kaur turned out to be stronger.

Valery Gorban and Sergei Larens passed their winter exam with quite high score. The Ukrainian- Estonian duo started their spring break as leaders in two championships at once. 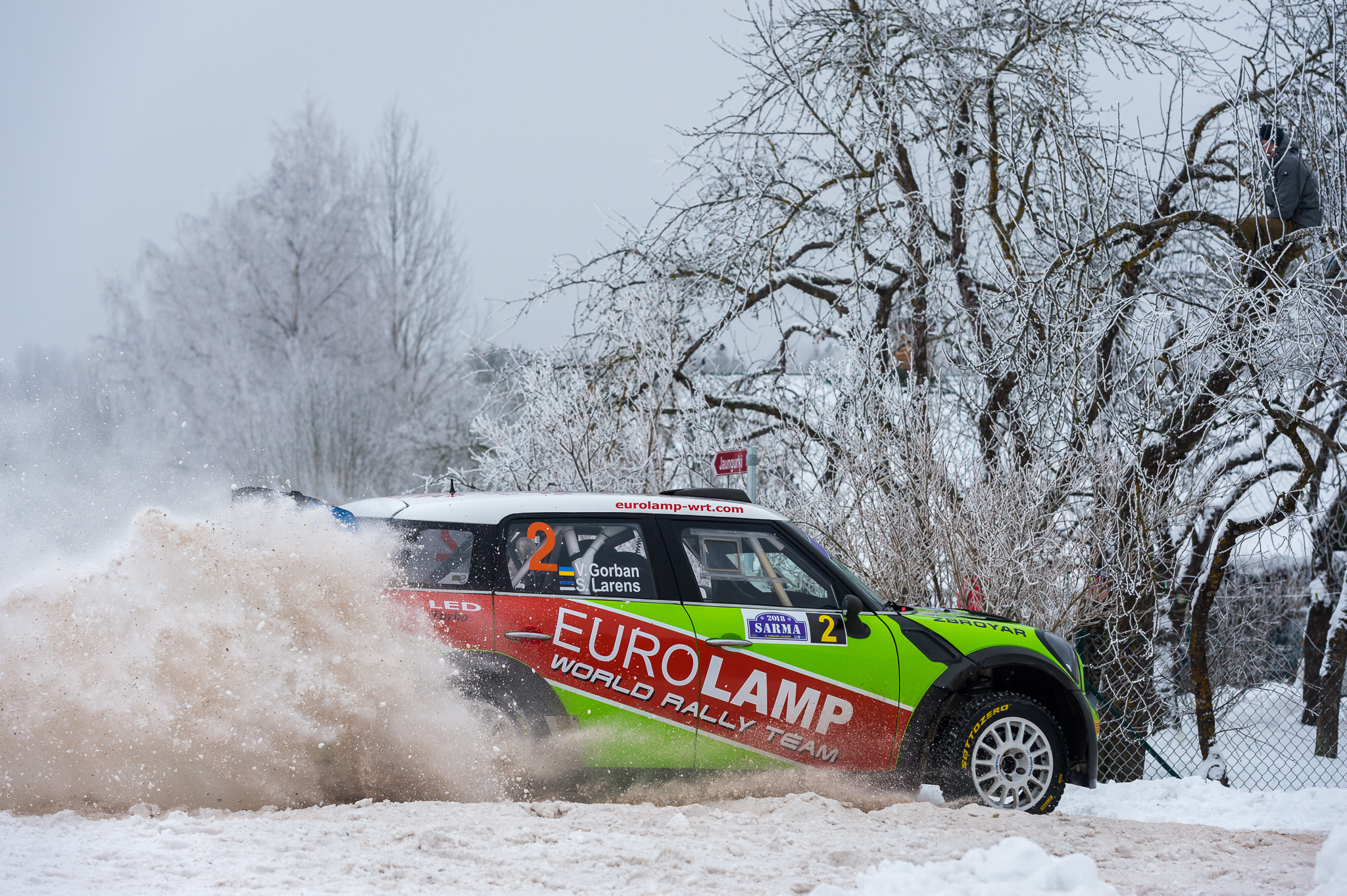 After the two-month break, both championships came out of hibernation in May. Although the decision was made that from now on each championship should go its own way.

Tallinna Ralli was held in early May. The race in the vicinity of the capital of Estonia added a new intrigue to the struggle for the absolute champion’s gold: George Gross’s crew joined the race on his WRC-class vehicle. Keen fight, especially at the end of the race, tied up many participants in knots. Both Gross and Gorban shown real champion driving: someone was mistaken more, and someone less. As a result, the three-time champion of Estonia pulled out a victory at home. Eurolamp World Rally Team was second, and the Finnish junior Emil Lindholm closed the prize three.

The crew didn’t take any rest, and went to the third stage of the Latvian Rally Championship already next week. Rally Talsi became an easy walk for the championship leaders. They did not win all special sections, but maintained leadership from the start to the very finish of the race.  As a result, they won another victory and strengthened their leading positions in the Latvian rally championship. 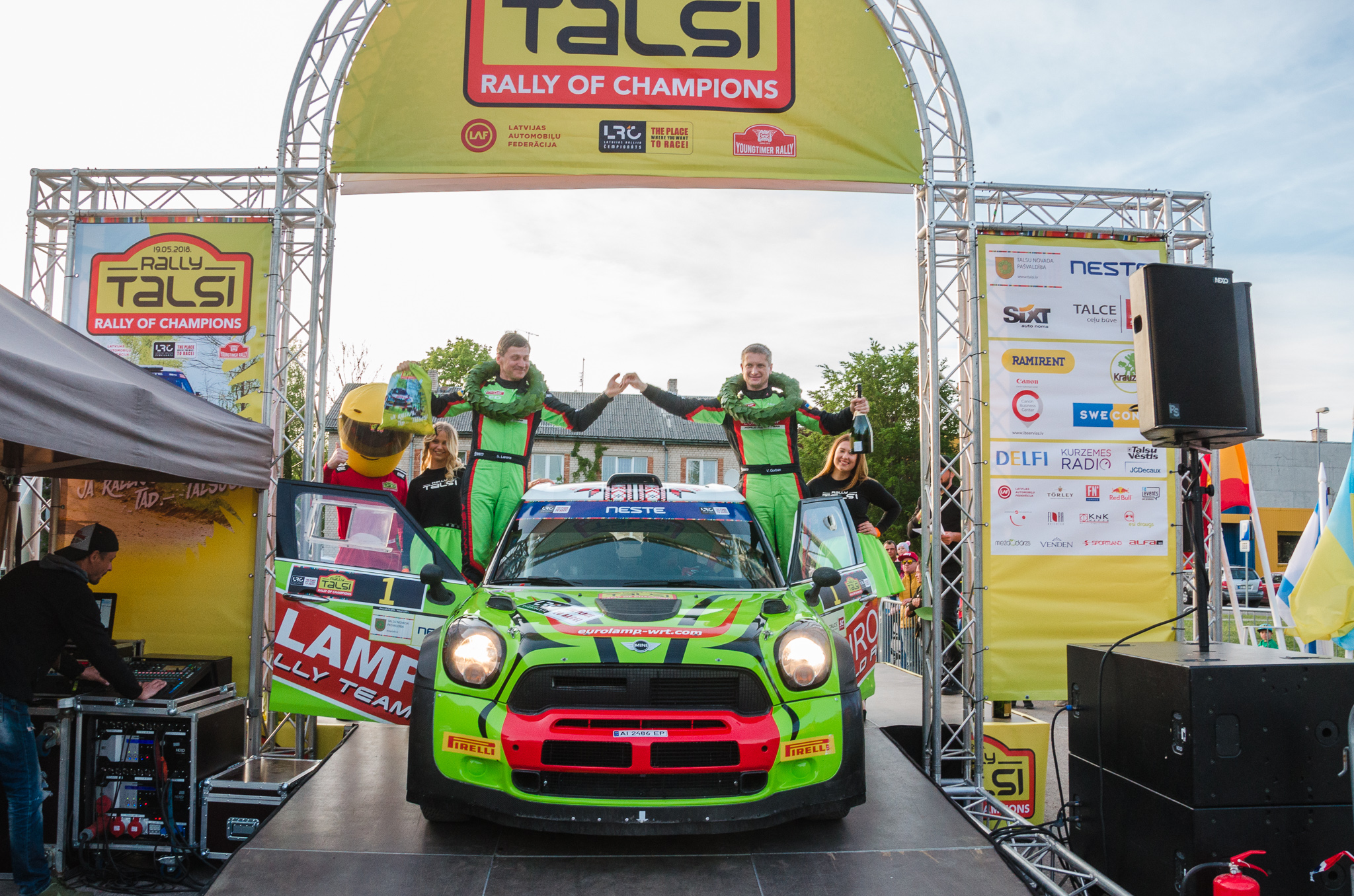 In June, the Estonian confrontation continued at Viru Ralli. The race was held in Georg Gross’s hometown, where he felt very comfortable at special sections. Reports from special sections were very diverse for all, except for the first two crews: Gross was consistently the first, followed by the Eurolamp WRT crew. Gross won second victory, and the championship mood turned spikiest.

Two championships were again overlapped, but this time in the Estonian rally. Such a flagship event brought together not only the Baltic rally elite, but also part of the works’ teams of the World Rally Championship.

On the first day of the race, Eurolamp World Rally Team managed to finish and even to become the winner in the Latvian standings, but that was not so easy. The fact is that the hard landing from a hill resulted in Valery Gorban’s spinal injury and he was simply not able to continue the fight with all his might. The second day was quite calm and made it possible to add so important points to the championship collection. 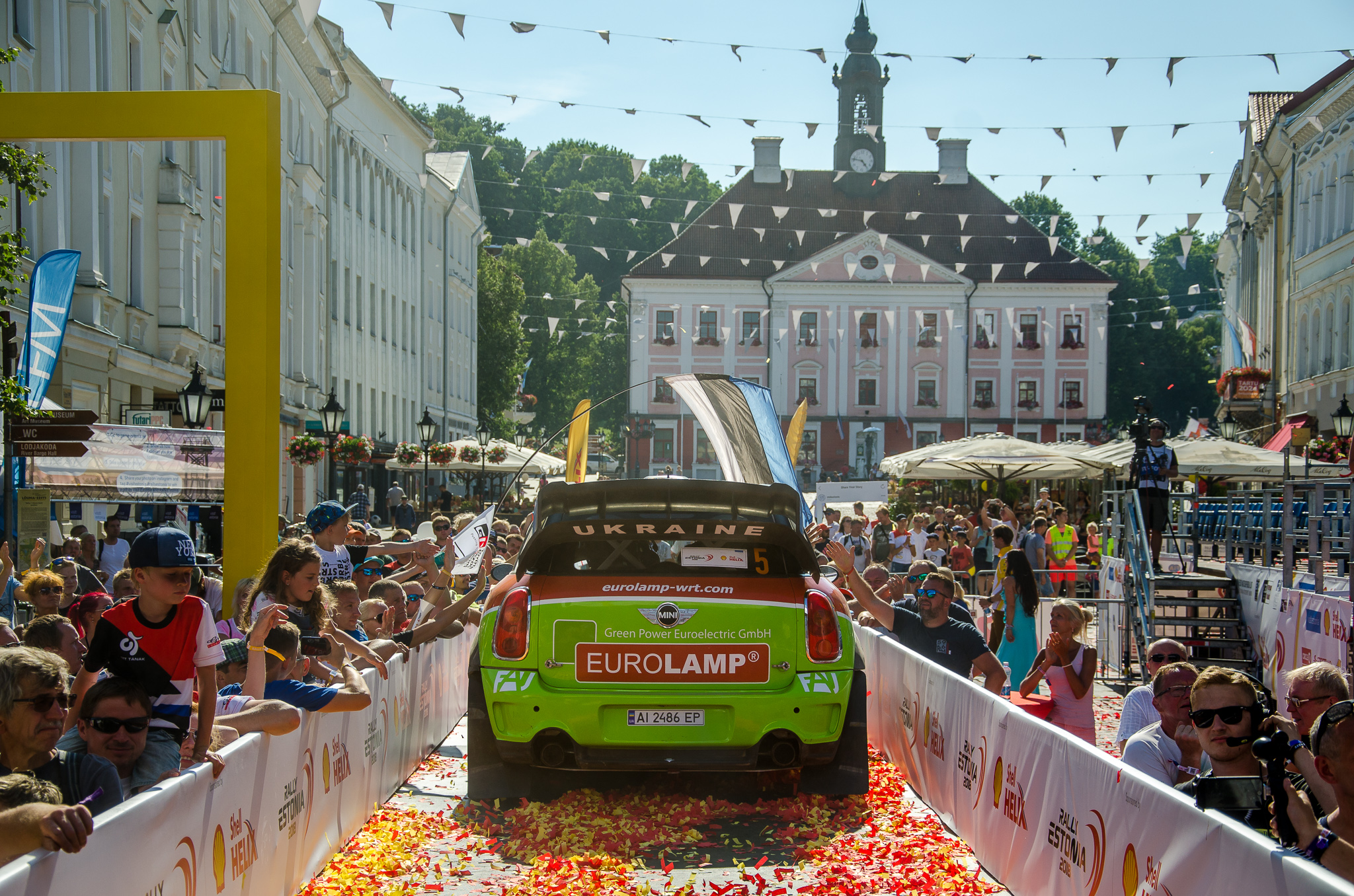 The crew had to miss Lõuna-Eesti Ralli held in August because of the rehabilitation. Georg Gross, the main rival of Valery Gorban, failed to succeed in the south of Estonia as well. He fell out of the race at the very beginning, thereby deleting himself from the contenders for the champion title.

Finals of two championships took place on the same dates, but in different locations. As a result, there were two races: one in Liepaja, where Valery Gorban and Sergei Larens had to compete with the crew of Ranno Bundsen, and another on the island of Saaremaa, where the final stage of the Estonian Rally Championship had to take place on the next day. Eurolamp World Rally Team solved the issue logistically: they simply sent two pit teams and two cars to different cities in Estonia and Latvia, but there was the only one crew that managed to arrive to the last stage of the Latvian championship held on Sunday after the Estonian race finished on Saturday.

Ranno Bundsen applied for, but did not arrive to, the Saaremaa Rally, and the Ukrainian-Estonian duo became the absolute champion even before the stage start. The second to the last stage of the championship took place in Liepaja on the same day, and Ranno Bundsen clearly wanted to be the first, but Nicolas Gryazin’s crew deprived him of such a chance. Moreover, at the last stage started the next day, his ambitions were cut not only by Gryazin and Gorban, but also by a pressing, as an accident happened with an extremely stable crew cannot be explained otherwise. Valery Gorban’s crew finished confidently and got their second title of champions within two days only. 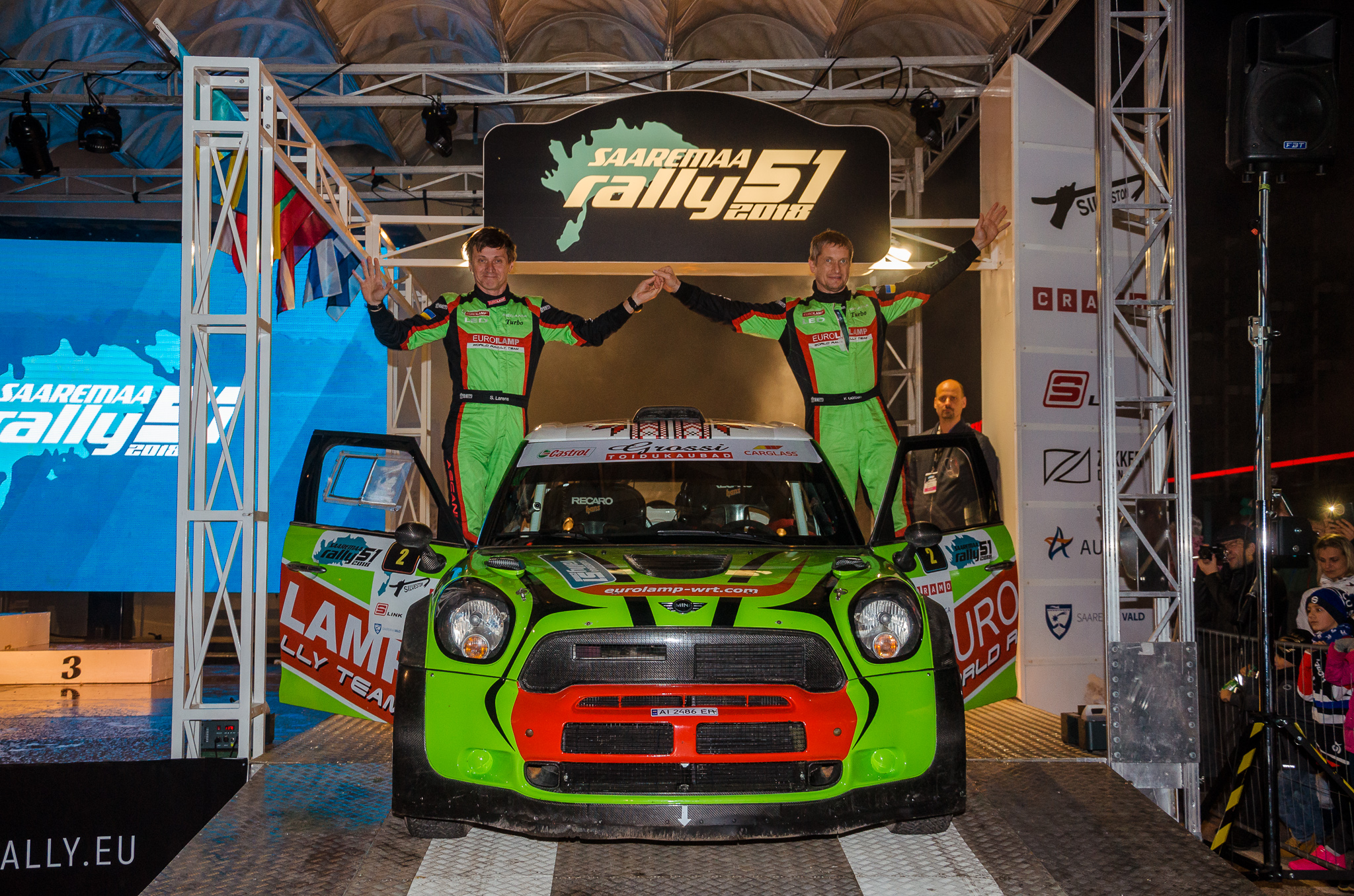 There was achieved a sort of a record. Rally statistics are silent about such events on a national scale, but the fact that two titles were won at different stages, in two different countries and within two days only is a fact and an amazing conjunction of circumstances.